Posted on November 30, 2016 by stevemiddlehurst 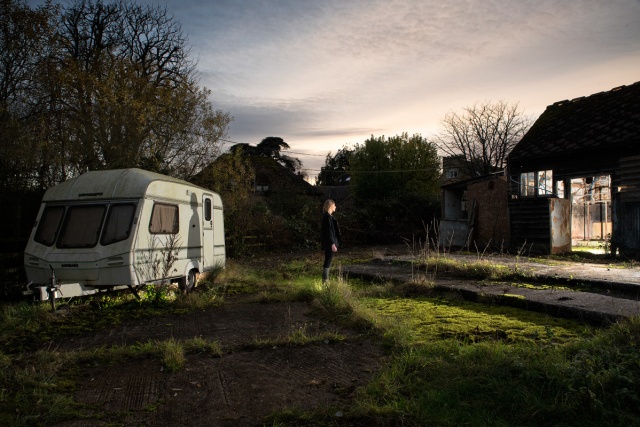 This assignment evolved from assignment 2, a fact that brought specific challenges to the project in that it was important to move forward both the overall subject narrative and my approach to the project.

Working with the same subjects in much the same locations over a period of ten months can easily lead to repetitiveness, or even what one might call the blindness of familiarity. To avoid this I took a step back from the project to visualise an end result that met the dual objectives of describing the subject more effectively than I had in March and to explore new perspectives that enabled me to develop my practice.

Demonstration of Technical and Visual Skills

There were two technical challenges; the lighting on location and the post processing to combine images and balance the natural and artificial light. I am reasonably satisfied with the approach to both these challenges. For the location lighting I used my knowledge of the site to preplan the shots and then carried out a series of test shots without the human subjects until I was satisfied with the balance and position of the flashguns. The exception was fig. 02 which being in the milking parlour left no scope for setting up lights and a tripod and where I used a handheld flashgun.

I have come to recognise that I am not a decisive moment photographer, I believe that my work is strengthened by a combination of subject knowledge and pre-planning so all but fig. 07 to 09 were to a greater or lesser extent pre-planned making this series the most “designed” that I have completed. I had visualised the basic concept for most of the shots and am satisfied that they generally met expectations. There are small details that disappoint me such as the lack of an interior light in the caravan shot – fig. 12 (no key) and the lack of depth in the interior of fig. 05 (too large a space for the number of flashguns).

Fig, 01, 02, 03 and 12 are manipulated to various degrees, fig. 12 being the most manipulated as a combination of three originals with the other three combining two originals. This gave me the scope to balance the background and, where relevant, the skies with the artificially lit subjects. My main concern is whether I should have warmed the flashgun light to imitate ambient artificial light rather than the bright whites that I settled on.

Overall I am satisfied with the outcome. I believe that the relation between the subjects and their working spaces has given a dimension to the project that straight portraits would have failed to produce.

I believe that the concept of presenting farming without falling into the trap of presenting a rural idyll was strong and that the idea was carried thorough effectively. It is all about choices and I chose a route that presented the subjects’ environment as working spaces, economic entities, and then placed them into those spaces to highlight the isolation and uncomfortable, if not harsh, working environments.

I felt that with this assignment more than any other that there was an imperative to create an approach that distinguished it from not just my previous work but also from the straight documentary style of some of my references. Although Colin Shaw, Denis Thorpe and John Darwell all influenced me in different ways it was the work of Scott McFarland that helped me devise a strategy that could introduce some much needed ambiguity into the final photographs and challenge my tendency towards a straight documentary style.

I also recognised that my relationship with the subject had evolved and that we understood each other far better than at the start of assignment 2. This allowed me to consider strategies that explored the use of a mixture of ambient and introduced light and the introduction of an element of staging. To achieve variety in the series I decided upon using both staged and un-staged photography and both natural and artificial light.

It is not exactly experimental to combine multiple images into a single image but to use these techniques for a final assignment felt as if I was developing my practice in a demonstrable way. I believe that by adopting a combination of pre-visualisation, careful planning, directed staging and post production manipulation I am finding an approach that extracts the most from my limited creativity, a kind of organised rather than spontaneous creativity. I found that I related to Scott McFarland’s words as much as to his photographs and saw in his approach a way of working that made sense and that allows me to pursue documentary subjects in a more contemporary manner.

The series is strongly contextualised by reference to contemporary photographers and a few more traditional documentarists. At this point in the course the contextual links are perhaps less direct and many of the practitioners I looked at earlier in the course such as John Goto, Yrjö Tuunanen, Gregory Crewdson and Henrik Duncker have continued to influence my thinking.

4 Responses to Assignment 5: Self Assessment