A4 Research: A Little More on Twenty-Six

Posted on August 5, 2016 by stevemiddlehurst

In 1992 Jeff Brouws paid homage to Ruscha with Twentysix Abandoned Gasoline Stations (1) (i), a series that has great similarity to Ruscha’s original work using black and white photographs and a mixture of angles and compositions. Brouws presents his series in typology grids which is a significant presentational shift.

In Ruscha’s series the viewer is invited to inspect the banal structures whereas by placing nine on a page Brouws uses multiplicity to emphasise that many such stations have been abandoned; Unlike Ruscha’s neutrality Brouws’ work is always political and his presentation style, with its echoes of the Bechers initially interested me and I considered presenting my twenty-six polling stations in this way. 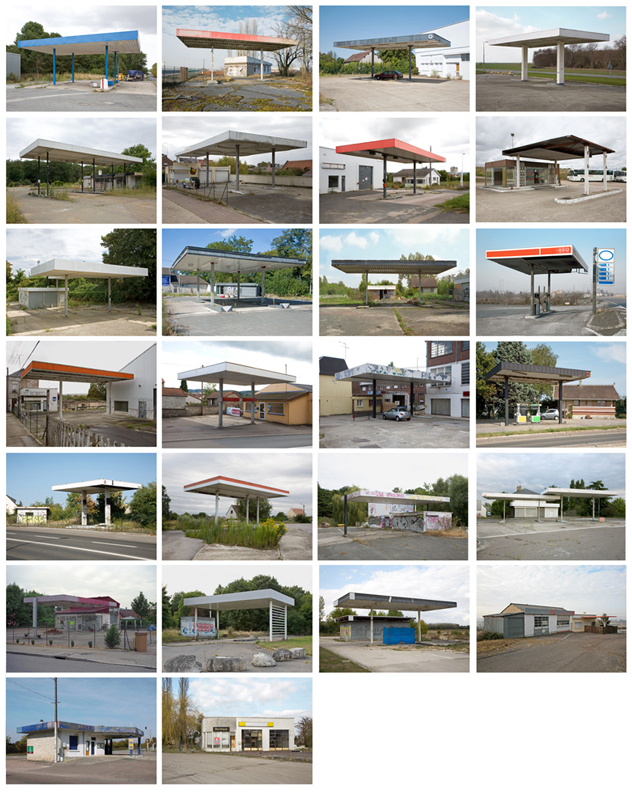 In 1999 and again in 2011 the French photographer Eric Tabuchi created two series Twenty six Abandoned Gasoline Stations (2) and Twenty six Recycled Gasoline Stations (3). The subject matter, titles and the strong diagonals in “Abandoned” are the most obvious links to Ruscha but the most interesting relationship is the evolution of the Deadpan style that Ruscha pioneered. If Ruscha shows the state of the art in 1962, Tabuchi shows how it had developed forty years later. Tabuchi’s work is more direct than Ruscha, he shows non of the ambivalence towards photography that Ruscha is famous for. With Ruscha we could look if we chose to, his gasoline stations sit back from the viewer inviting inspection but not demanding it; Tabuchi slaps his petrol stations centre frame, strong architectural structures that dominate the frame, there is no ambiguous message.

I rather like Tabuchi’s work, his series are an eclectic mix of socio-political comment and humour. When I see an abandoned petrol station it is his work that comes to mind rather than Ruscha’s which may be no more complex that his use of colour or that his subject matter is as European as Ruscha’s is American.

(i) I looked at Jeff Brouws and Eric Tabuchi last year in an essay on Seriality and Neutrality.