Posted on January 22, 2016 by stevemiddlehurst

Assignment 1 calls for portraits of the non-familiar, people previously unknown to the photographer. My aim was to use a series of formal studio portraits to explore how perceived identity is transformed  as the context of the portrait is modified.

I previously looked at some of the forms of portraiture that evolved from nineteenth century practices (here) and considered the idea that the formal photographic portrait, which retains many of the attributes of the painted portrait, is the sub-genre most open to manipulation by the sitter and or the photographer. The posed formal portrait can add to our knowledge of an individual but we are alert to how their identity is potentially manipulated by pose, setting and presentational context.

Graham Clarke states that “at virtually every level, and within every context, the portrait photograph is fraught with ambiguity,” (1) and it is this ambiguity that is intriguing. Governments utilise  the portrait to authenticate identity; August Sander (here) and other subscribers to the false science of physiognomy, believed that the portrait provided an index to character and social status; the historic carte de visite (i) or Facebook profile picture is proffered as descriptive of the subject but is too small to interrogate and of such limited aesthetic value that the character of the subject is rarely apparent and Julia Margaret Cameron, amongst others, endeavoured to photograph the inner self. Each of these perspectives can be investigated in depth but the answer remains constant: the single portrait photograph is no more than a facsimile of the individual’s outer surface, and like the cover of a book, can at best, only suggest the nature of the interior, the inner self, but never particularise it.

In response the photographer and the subject collude to fill the space between the representation and the subject’s identity by creating layers of context; controlling the structural components of the portrait: frame, pose, gesture, props, clothing and setting, and in the way the image is presented. As Clarke points out, more than any other form of photography, the portrait can only be interpreted in context so the elements introduced by the photographer and subject act as variables in an equation of identity that enables the viewer to reach a more complete interpretation.

Paradoxically the passport photograph, which is arguably the least manipulated form of portrait, often captured by machine and with its context limited to the document within which it is contained, is used to authenticate identity; whilst at the other extreme Cindy Sherman (here) offers highly contextualised self portraits to describe a multitude of false identities; Bill Brandt (here) proffers false documentary portraits using friends and relatives as models in imagined scenarios; and Alison Jackson (here) employs doppelgängers to stage celebrity portraits. The portrait is indeed fraught with ambiguity.

The conventional studio portrait can exist anywhere between these extremes. As discussed above it involves significant manipulation, the photographer has intervened in the subject’s normal life bringing them into an alien environment where the photographer is comfortable and the subject feels displaced. Once in the studio the photographer imposes themselves by adopting a directorial stance or, like Richard Avedon, waits in silence until the force of his personality (3) creates a hierarchical relationship between photographer and subject. 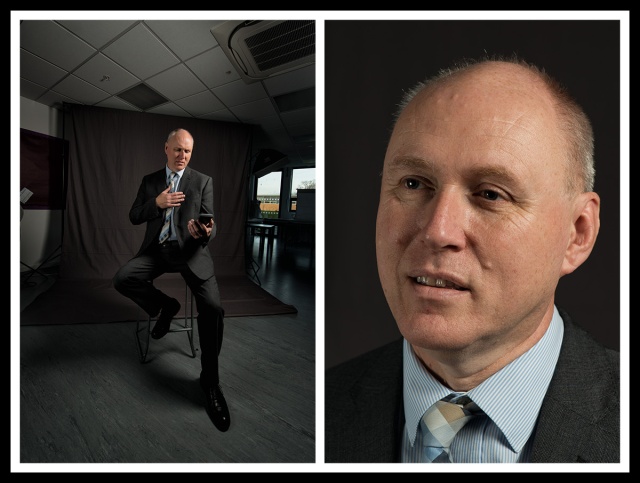 Fig. 04 Personal Assistant to the Principal 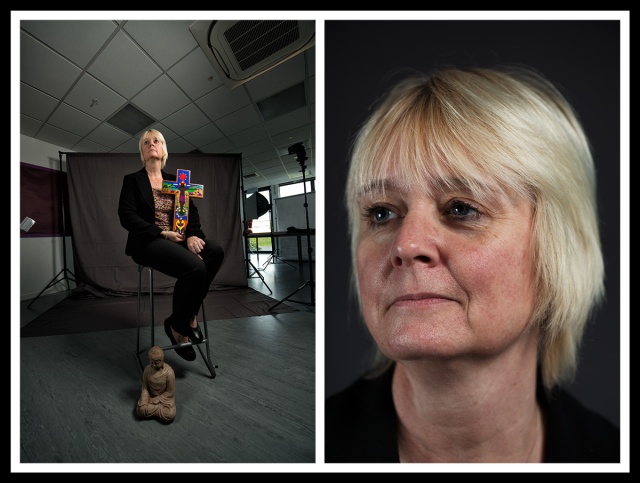 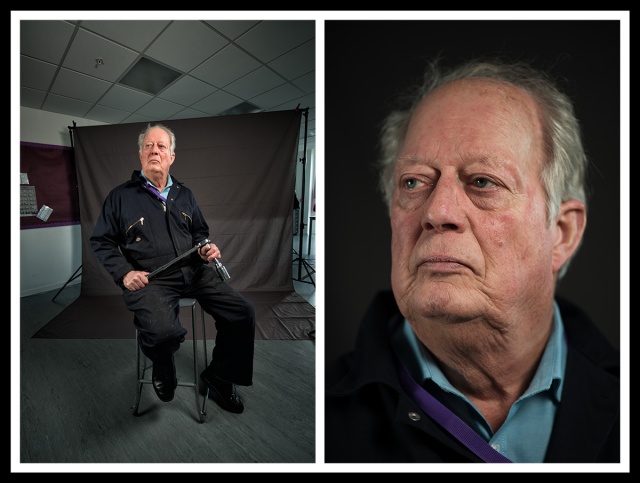 Having established a make shift studio (ii) in a classroom at an academy that I regularly visit I asked for sitters from staff members whom I had never met. Each person was asked to visit the studio at some point during a particular day and bring one item that helped define their role in the institution. In addition I approached staff in the corridors to persuade them to enter the studio for a picture.

I took three photographs of each subject; one head shot, one three-quarter length shot holding their chosen item and one wide angled shot that included their whole body and the studio. The original idea was to create a triptych but during editing I discarded the second shot which added little value and settled on a diptych for the final prints.

In the context of modern society my volunteers are heroic people, educators of the next generation, working long hours in difficult circumstances with less than adequate resources, over monitored and endlesslessly judged by people outside of their profession, whilst striving to inspire hormonal teenagers whose default position is to be bored. It was important to photograph then in a way that would emphasise this heroic characteristic and as the end result would be a typology I wanted to adopt a common approach that would work across genders and age groups.

Initially I reviewed a range of “classic” portrait and fashion photographers including Hurn,  Snowden, Parkinson and Beaton but part of their skill was to adjust their approach to suit the subject which went against the objective of a common approach. David Bailey (4)(here) offered some reference points especially with his Democracy (5) and Box of Pinups (6) series; Democracy has a common style and does not feature celebrities, by photographing ordinary people Bailey, because of his own status, changes their identity creating an aura of celebrity around them; Box of Pinups is in many ways a typology of 1960’s icons captured in the deceptively simple, unfussy style that Bailey made his own.

A number of photographers have explored identity in the context of people’s trades or professions. August Sander perhaps took this idea further than anyone in Face of Our Time (7) and People of the Twentieth Century (here), his concept is an obvious reference point for this assignment but stylistically I wanted to work in a different direction. Another reference was Irving Penn’s studio work from the 1950s in Paris and London when he took a series of portraits of tradesmen; In Beyond Beauty (8) there are six pictures from this series which are very typical of Penn’s methodology of appropriating his own approach to high fashion and directing it at a mundane subject. Merry A. Foresta, the curator, emphasises this point by placing a Dior Black Suit fashion shot alongside Penn’s portrait of a Chevrier, both taken in Paris in 1950 and one assumes in the same studio; we are now more used to seeing tradesmen (or models as tradesmen) in advertising and fashion but the cheese seller, coal man or baker photographed as if promoting high fashion was unique to Penn in the 1950s.

However, it was another picture from this same collection that partly inspired the wide angled portraits in this assignment. In the Rochas Mermaid Dress picture from 1950 Penn reveals part of the studio behind the edges of the backdrop.

Penn used this technique occasionally and it modifies  the sterility of the studio  backdrop, exposing it as false and paradoxically making the overall setting more real.

The other influence that I wanted to incorporate was Bill Brandt’s use of a wide angled lens to “take nudes in an enclosed space” which  had in turn been inspired by the photography in Citizen Kane of which he said ” you could see everything, the ceiling, and terrific perspective, it was all there.” (9) Brandt let his wide angled, ex-police camera, lead his compositions creating what biographer Paul Delany calls a “distorted, chiaroscuro world”.

Using Penn and Brandt as a starting point for the wide angled images I found my reference point for the head shots in classic Hollywood studio photos, the face and eyes pointing away from the lens, projecting the subject as thoughtful, reflective, glamorous, perhaps listening to someone off camera (iii), an idea that seemed appropriate for the modern teacher who listens more and talks less than previous generations. I am interested in the anonymity of the photographers who took most of these pictures (iv), it is an example of photographs, like the early carte de visite, where the photographer has been reduced to the role of technician and the subject is the only relevant participant in the portrait. I wanted to bring this idea into my series, to openly reject the idea that a portrait is more about the photographer than it is about the subject.

The Development of Identity

If we take the single head shot as a starting point it contains few clues to the subject’s identity. It insists on their presence as an individual but the subject is unidentified and without status. By looking at the same head shot as part of the 5 x 3 contact sheet in figure 1 there is some development of identity as the contact sheet infers that the subject is part of a group but for the subjects to acquire status it would be necessary to caption the sheet. Once captioned as “Staff of Salisbury Academy” the context significantly develops, we now see this group as professionals.

The final set of five diptychs develop identity in a different direction; firstly by showing the subject with an item that they chose as representative of their role, by placing them in a wide angled composition that shows parts of the classroom, by seeing them in their working clothes and then by adding a caption that includes their job title. I have consciously excluded the subject’s names but these could have been added to further develop identity.

(i) Carte de visite photographs were small albumen prints mounted on small 2 1/2 by 4 inch cards that became popular across the world after being patented by André Adolphe-Eugené Disdéri a French photographer. The process  was based on a camera with 4 lenses that allowed it to take four simultaneous negatives, the plate was then slid into a new position for a further four identical frames. The resultant negative could be used to print a single sheet containing eight photographs that could be cut into separate prints. The carte de visite became hugely popular during the American Civil War as memento of soldiers leaving for the front but also found an application as a collectible along the lines of the much later cigarette card. 70,000 carte de visites of Prince Albert, Victoria’s consort, were sold in Britain in the week following his death. (2)

(ii) I used a simple set-up to allow me to work quickly to avoid negatively impacting the volunteers’ day. I used a grey backdrop, and three flash guns managed by a wireless controller on the camera. the first shot was taken with a 120mm lens, the send with a 50mm and the wide angle with a 14mm lens. Changing the lens twice was not ideal and if I was to repeat the exercise I would use two cameras and just two lenses. Before the first volunteer arrived the Head of Art assisted as a sitter while I fine tuned the lighting and angles.

(iv) One of the interesting aspects of these studio publicity shots is that they are rarely associated with a named photographer. There were and are notable stills photographers working in the film industry, David Hurn and Mary Ellen Mark are two who immediately come to mind but from the 1920s onwards every studio publicity department had one or more photographers who created publicity photographs of the stars. Few appear to be remembered.

(2) Newhall, Beaumont (1982) The History of Photography. New York: The Museum of Modern Art

2 Responses to Assignment 1 – The Non-Familiar